OUR KINGDOM IS YOUR STAGE

The KwaZulu- Natal Film Commission’s invitation for Made for TV project proposals.

The KwaZulu-Natal Film Commission (KZNFC) launched its Film Fund in July 2014. The Fund is for the production and development of television, feature films, short films, animation and documentary content. The Film Fund also caters for Marketing and Distribution, Audience Development and Markets and Festivals.

The vision of the KZNFC is to position KwaZulu-Natal as a globally competitive, diverse and sustainable industry and choice film destination. The Film Fund is designed to stimulate the economy in the film and TV Industry and supporting industries. With the KZN industry being a distant third to Gauteng and Western Cape in terms of market size, it is important to grow the industry from within while attracting lucrative productions from outside the province.

After consultations with industry during the Durban International Film Festival in 2018, the KZNFC realised the need to focus its resources to develop and improve the quality of Made for TV (previously known as Micro-Budget) content and stimulate production activity in the province.

The KZNFC is therefore inviting eligible KZN filmmakers to submit proposals in order to participate in the Made for TV Quality Boost Programme which will fund the development and production of 10 Made for TV movies.

The Made for TV Quality Boost programme will include an evaluation and selection process where the successful projects will be invited to pitch to a panel at the KZNFC. Successful projects will go through a development process, which entails attending a series of workshops over a three- month period to assist the filmmakers through the development process. 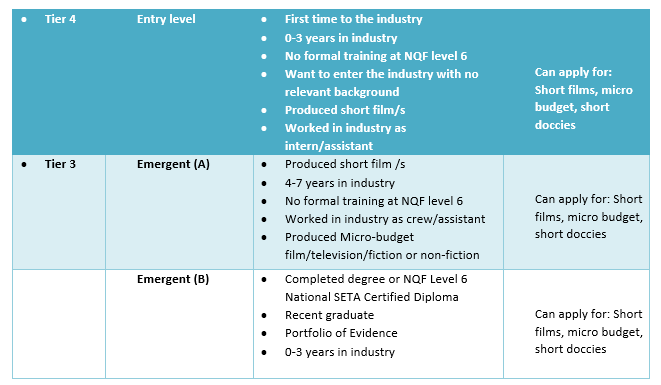 (in the form of a municipal councillor’s letter, a municipal bill in their name that is not older than 3 months or a signed lease agreement)

All application queries must be directed to KZNfilmfund@kznfilm.co.za with the subject heading : Made for TV Quality Boost Programme Application

Applicants are encouraged to engage the KZNFC prior to the closing date should they require further clarification.

No applications or additional documentation will be accepted after the closing date. Please note that proposals that do not adhere to the above criteria will be disqualified.